The following workflow uses custom nodes from the packages: “SpringNodes”, “Archi-Lab”, “SteamNodes” and “MEPover”.
There are a few things to consider when managing your spaces:

A. Aligning levels
The first one is easy as this is usually done when setting up your model. I take it everyone knows how to use the copy/monitor function, so let’s skip this step.

C. Space creation and coordination
This is the hardest part. There is no single right way to manage the coordination between your spaces and the rooms from the linked model. If you are not in the same office as the architect it’s almost impossible to keep track of the changes in the linked model. It would mean checking every space that no longer has a matching room number and looking for that room’s new location or it could also have been deleted altogether.
I therefore put some thought into creating a workflow that would work for any situation, regardless of the changes to the rooms. The only prerequisite for this to work well is that every room has a unique room number (sadly I still run into a lot of architectural models with duplicate room numbers, even though Revit gives explicit warnings stating that this is actually a bad idea…).
let’s assume that every space has the same number as the room it is associated with. Now whenever you load a new architetural model, the spaces will retain their space numbers (basically the state of the old architectural model). All you need to do is find the difference between the new rooms and the existing spaces. There’s basically three options to choose from:
1: A room number has been deleted
2: A room number still exists in the model (and might have moved)
3: A room number is new

To gather the information above we can use a really useful data structure known as a ‘Set’.
Sets are a collection of unique items upon which you can perform some functions you can’t do as efficiently with lists. Luckily Dynamo has included a few nodes for working with sets. There are 2 important methods that can be used with sets: ‘SetDifference’ and ‘SetIntersection’. Explaining these is best done through an example:

As you can see, this way it’s possible to find out exactly what we are looking for. Now let’s have a look at the next challenge: associating room/space numbers with actual rooms and spaces. We can achieve this by using a dictionary in which the keys are the space/room numbers and the values are the actual spaces/rooms. The output of the dictionaries will be the data to use for creating, managing or deleting the current spaces. Here is the result (with explanation):

After this make sure that the new space numbers change to match the associated room numbers. After that you can repeat this entire workflow for every new linked model update you receive.

Overview: This workflow allows the user to automate the process of deleting ‘not placed’ rooms by level from the model, schedules, etc.

END_OF_DOCUMENT_TOKEN_TO_BE_REPLACED

This node will take inputs for Rooms and a chosen Level, and output the aforementioned Room outlines as Polycurves.

This will collect Rooms and list Room Properties, including Boundaries.

This was developed as part of the workflow to convert Rooms to Floors. Revit needs ModelCurves, but to get there Dynamo needs to make Polycurves from the Room boundary. Simply send a list of Rooms as input:

This checks if a given Point is contained inside a Revit Room element. Combined with various collection tools, it can effectively build a list of items that are inside a Room across links in a federated model.

This node will generate 3D Room Tags for all rooms using a family provided in the package directory. 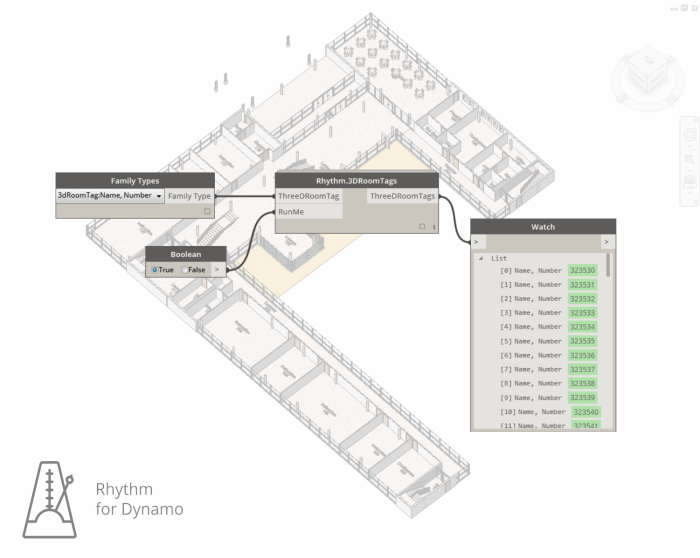 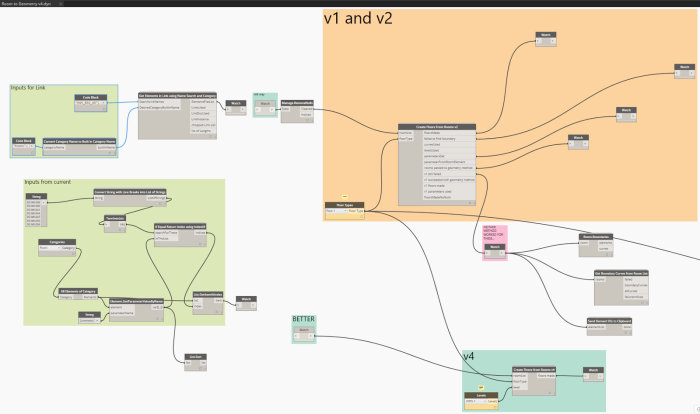